Perhaps the most unique historical museum in the Pacific Northwest is Maryhill Museum of Art, located near Goldendale in central Klickitat County. Near the junction of Highway 14 and Highway 97 is the former mansion of Sam Hill, the famous road builder. His old world chalet was converted in the late 1920's into an eclectic museum of both European and Native American objects. Maryhill Museum and its exquisite grounds, perched on the hillside overlooking the Columbia River, is a must see attraction for anyone visiting the Pacific Northwest.


To the east of Maryhill Museum is Stonehenge, a replica of the famous ruins in England, which Sam Hill built to honor the county's war victims of World War I. The monument sits above the small orchard community of Maryhill. Sam Hill's Maryhill Loop Road, the first paved road in the state, winds from Maryhill up the steep grade of the Klickitat Hills towards Goldendale.


On a nearby hill overlooking Goldendale, the state of Washington operates an astronomical observatory. The observatory houses the largest publicly available telescope in the U.S. In the town of Goldendale, as one of several distinguished turn-of-the-century homes, the Presby Mansion houses the Klickitat County Historical Society Museum.


Bickleton in central Klickitat County is home to the Whoop-n-Holler Museum with a large display of antique cars, heirlooms, and agricultural exhibits. Like stepping into the past, the museum offers a true taste of Americana.


Two major Columbia River Dams, The Dalles Dam and the John Day Dam are open to the public and have a variety of fishery and hydro-electric displays. Visitors can actually view spring and fall salmon and steelhead migrations and observe fish management operations. There is also learning center information on salmon and steelhead migrations and hydro-electric power generation.


In Bingen, the Gorge Heritage Museum is housed in an historic church and features many interesting artifacts of the western Klickitat County area. In the summer, the Trout Lake Country Inn features live theater of often original material. 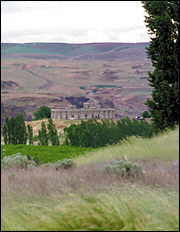