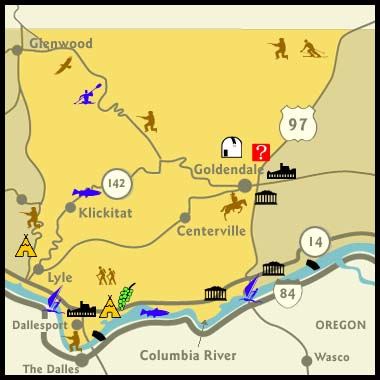 
As it flows from its source between Mount Adams and Mount Rainier, the Klickitat River carves a spectacular canyon through the county. Roadside pullouts along the Goldendale-Glenwood highway, afford breathtaking views. The Klickitat canyon offers fine salmon and steelhead fishing and the general area is popular for both deer and turkey hunting. The town of Klickitat, at the base of the canyon, 13 miles from the mouth of the Columbia, is an example of a former Northwest timber logging town. It is now a stop for fishermen, mountain bikers, hunters and other recreation-seekers who come to central Klickitat County.


Visitors to central Klickitat County will notice a west to east shift in vegetation. Fir forests in Snowden give way to stands of white oaks and pines in the swales and canyon ridges along the river, and to the treeless plateau areas surrounding Centerville and Goldendale. North of Goldendale are the forested Simcoe Hills which reach over 5,000 feet in elevation and separate Klickitat County from the Yakima Valley to the north.


Goldendale is the county seat and largest community with 3,500 people. On a hill near town, the Washington State Department of Parks operates an astronomical observatory. Goldendale is home to several fine historic homes, including the Presby Mansion which houses the Klickitat County Historical Society Museum.


Along the Columbia River, Central Klickitat County has several world class windsurfing sites, and is also home to The Dalles Dam and Horsethief Lake state park with its petroglyph tour and rock climbing. Wishram, an historic railroad town, sits adjacent to the former site of Celilo Falls.